THE SILENT FILM SOCIETY OF CHICAGO

​Experience silent films the way they were meant to be seen… 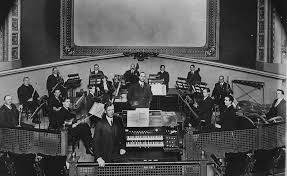 One of the extraordinary things about the silent cinema is its ability to communicate to everyone. Not bound by the restraints of speech, its powerful ability to express truly makes it an international language. Several factors make the silent film experience truly unique and enjoyable: the music, the theater, and the film presentation. Each of these elements makes the silent film come alive.
Music
Silent films were never really silent. Music is a fundamental part of the silent films experience. In the early years, background noise from the film projectors were covered up by the music from the piano, either from a piano roll or a live pianist. Later, theaters engaged pit orchestras to accompany the story on the screen. The development of the theater pipe organ, which was played by a single musician and could produce sound effects and create the “voice” of an entire orchestra, became synonymous with the silent movies. Today the venerable pipe organ, a cast-off in Hollywood’s hasty conversion from silent films to talkies, makes a grand comeback with the help of the Silent Film Society’s featured photoplay organists, such as Jay Warren and Tim Baker.
Theater
The majestic movie palace, complete with the grandiose pipe organ, have been replaced by today’s modern multiplex movie theaters. Only a few remain, and the Silent Film Society is fortunate to count only a few historic Chicago area theaters as their screening sites — the Portage theater in Chicago, the Pickwick Theater in Park Ridge, IL, the Des Plaines Theater in Des Plaines, IL, and the Arcada Theater in St. Charles, IL.
Live Cinema
Often, the only exposure most people have to the silent cinema is through film clips shown on television, accompanied by an out-of-tune piano or inappropriate background music, with the film itself shown at the wrong speed. When sound was first introduced in Hollywood, studio heads were reluctant to invest extensively in the talkies. At this point, the silent film photoplay had developed into near perfection and they didn’t want to ruin what they had spent so much time and expense developing over the years. But the public wanted to hear their favorite stars speak, so silent films were replaced by sound movies and eventually were forgotten. Only with the emergence of organizations like the Silent Film Society of Chicago has it been possible for this overlooked art form to regain public recognition and acceptance. The combination of the majestic movie palace, a skilled accompanist at the theater pipe organ, and the best possible images add up to an illuminating experience that can best be described as Live Cinema.
The Silent Film Society of Chicago
A State and Federal 501c3 Not-For-Profit Organization
Copyright © 2022